A continuous excitation fluorimeter is designed to measure the Kautsky Induction or Fast Chlorophyll Fluorescence Induction (Kautsky and Hirsch, 1931*).

The chlorophyll fluorimeter uses focussed, high intensity light from red LED’s to induce a fast chlorophyll fluorescence response from a dark adapted sample. Continuous systems require the use of a special leafclip system. This is a multi-purpose tool which provides dark adaptation for the sample (required for the measurement of maximum photochemical efficiency), defines the measurement area on the sample and prevents ambient light leakage into the highly sensitive photodiode used by the instrument for chlorophyll fluorescence detection. 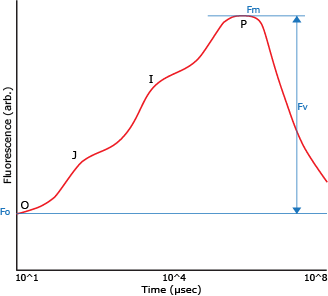 If a sample is dark adapted the PSII electron acceptor pool is gradually re-oxidised to a point where all of the PSII reaction centres are capable of undertaking photochemistry. If that sample is then suddenly illuminated with a high intensity light source, a rapid (approx. 1 s) polyphasic rise in chlorophyll fluorescence may be observed which is subsequently followed by a slow (approx. 2 min) decline in fluorescence intensity to a steady state level of fluorescence. This induction phenomena is often referred to as the Kautsky Induction (Kautsky and Hirsch, 1931*).

Kautsky Induction curves must be plotted on a logarithmic axis in order to observe the polyphasic rise to the maximum chlorophyll fluorescence value. This is due to the reactions causing the different kinetics occur typically in the first 300 msecs of illumination.

Chlorophyll fluorescence measurements are not absolute. The fluorescence emitted depends upon the light intensity and the response of the plant to the new light conditions. Many of the commonly used comparative fluorescence parameters are ratios. It is therefore important that measurements are made in truly comparable circumstances if data is to be used for comparison. The use of a fluorometer to make measurements is only one aspect of good experimental design and procedure.

If Fo and Fm cannot be determined accurately, all calculated values will be inaccurate. The accurate determination of Fo depends upon instrument design. The measuring device should be capable of rapidly recording the fluorescence signal induced by illumination.

Hansatech Instruments produce 3 types of continuous excitation fluorimeter, Handy PEA+, Pocket PEA and the M-PEA. All of these systems utilise a fast data acquisition system capable of recording every 10 microseconds. An algorithm is then used to determine a line of best fit through the data points recorded immediately after the start of illumination. This line is extrapolated back to time zero when illumination commenced in order to derive Fo.

It is vitally important that the illumination should not vary in intensity during measurement otherwise the Fo and peak fluorescence will have been determined using different light levels and therefore cannot be compared.

The illumination must also be at full measuring intensity before measurements commence, otherwise the early data points are recorded at varying light intensities. This is the advantage of using LED’s as they almost instantaneously rise to full intensity when illuminated.

Saturating intensities will vary from species to species, and with the period of dark adaptation and the environmental conditions in which the plant is growing. It is important to ensure that saturation is achieved by measuring at various light intensities after a range of dark adaptation periods to check that the Fv/Fm ratio cannot be increased by using higher light levels. 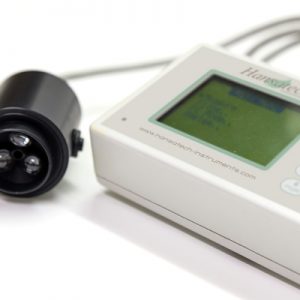