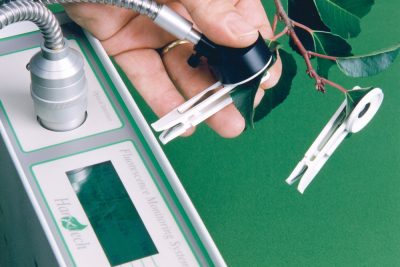 The FMS 1+ modulated chlorophyll fluorimeter is a versatile pulse-modulated instrument with mains power supply for laboratory/near-field use. It is suitable for non-invasive sampling of chlorophyll fluorescence under natural or artificial light conditions and may be interfaced with our range of oxygen electrode chambers for simultaneous oxygen measurements.

The FMS 1+ modulated chlorophyll fluorimeter consists of a control unit housing all of the electronics, optics and light sources necessary to derive most common chlorophyll fluorescence parameters. These are optically linked to the sample by a statistically randomised fibre-optic cable that is suitable for insertion into a range of sample containers such as oxygen electrode chambers, older infra-red gas analysis (IRGAS) chambers, Petri dishes and microtitre plates.

The system may be operated in several different modes: serial connection to a Windows® PC enables real-time instrument control and data presentation.

Captured data is simultaneously presented as a real-time chart recorder emulation and parameters-only format for easy identification of key experimental events. This PC mode of operation is suitable for development of complex protocols which may be programmed into the instrument using the simple drag and drop editor to generate user-defined scripts. These scripts automate the execution of experiments, allowing complex protocols involving many control events to be operated with the same ease as single control event measurement such as

. Once programmed, the FMS 1+ chlorophyll fluorimeter can be operated as a stand-alone fluorimeter inside the laboratory or outside (via connection to an optional external battery). All measurement data and calculated parameters are saved to integral protected memory. The unit can store up to six experimental protocols, any one of which may be accessed and executed using the built-in menu system. When data collection is complete the results can be downloaded to the Windows® software for full analysis.

All of the light sources required for modulated measurement of common chlorophyll fluorescence parameters are self-contained within the instrument. 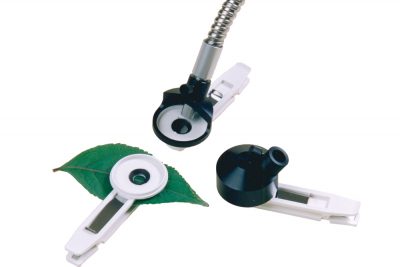 A leafclip system has been developed for situations where ambient light is to be excluded from the sample during measurement using the FMS 1+ or FMS 2+ chlorophyll fluorimeter. This is suitable for experiments requiring dark adapted measurements e.g. screening applications measuring

or situations which require adaptation of tissue to standardised doses of actinic light.

The system consists of small, lightweight leafclips and 2 different types of fibre-optic cable adapter. The leafclip itself has a small shutter-plate which should be closed over the leaf when the clip is attached so that light is excluded and dark adaptation takes place. The body of the clips are constructed from white plastic to minimise the effects of heat build-up on the leaf during the period when the clip is in place.

The locating ring section of the clip which interfaces with the fibre-optic adapter is also constructed from white plastic.

The sample rests on a foam pad whilst in the clip in order to minimise damage to the structure of the sample. The shutter-plate should be closed to exclude light from the sample during dark adaptation.

During dark adaptation, all the reaction centers are fully oxidised and available for photochemistry and any chlorophyll fluorescence yield is quenched. This process takes a variable amount of time and depends upon plant species, light history prior to the dark transition and whether or not the plant is stressed. Typically, 15 – 20 minutes may be required to dark adapt effectively. In order to reduce waiting time before measurement, a number of leaves may be dark adapted simultaneously using several leafclips. 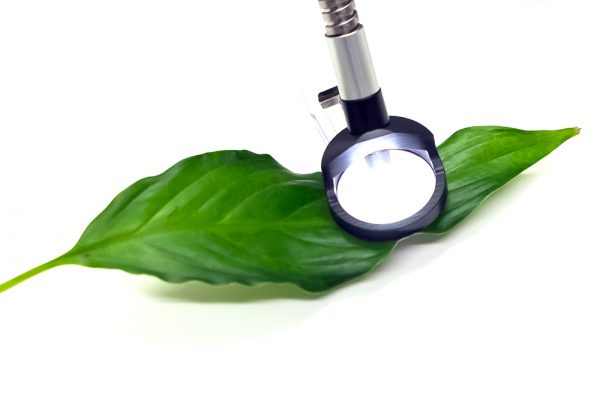 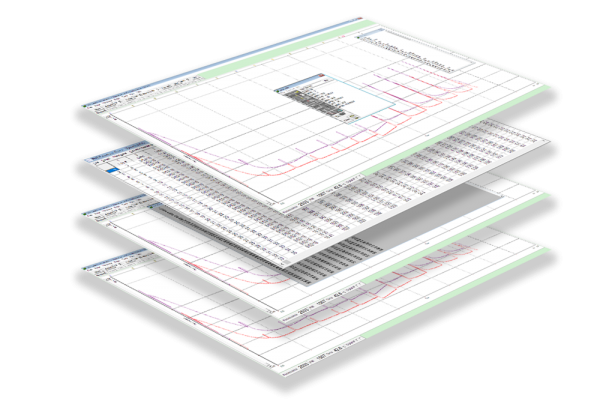 Complex experimental protocols may be automated to reduce repetitive work by developing scripts using an iconised script editor which allows a sequence of control functions and measurements to be developed into a protocol. Once created, scripts may be executed directly from the Modfluor32 program and data viewed while the instrument automatically completes a user-defined experiment. A maximum of six scripts can be downloaded to the instrument’s internal memory for operation without a computer.

The connection of an optional external battery to FMS 1+ (FMS 2+ is supplied with batteries) enables portable operation with data stored to instrument memory for subsequent upload and full graphical presentation on the computer.

A further application is also included with the FMS 1 and FMS 2+ chlorophyll fluorimeters. Parview32 is a stand-alone utility designed to allow easy upload and transfer of multiple parameter files to a spreadsheet type program.

Dark adaptation inhibits all light-dependent reactions. The resulting absence of photochemistry for a sufficient length of time allows complete re-oxidation of PSII electron acceptor molecules, opening PSII reaction centers and thus maximising the probability that absorbed light can be used for photochemistry. Commonly measured parameters from tissue in this state are used to calculate the maximum quantum efficiency of PSII and are usually used to reference measurements made on light adapted samples.

) is defined as the chlorophyll fluorescence yield following dark adaptation when all of the PSII reaction centers and electron acceptor molecules are fully oxidised and hence available for photochemistry. As a result,

is often measured at the beginning of an experiment when only the modulating beam is illuminated.

) is attained when the dark adapted sample is exposed to an intense saturating pulse of light from the chlorophyll fluorometer. This temporarily reduces all PSII electron acceptors preventing PSII photochemistry. The temporary absence of competition from photochemistry for absorbed energy ensures maximum chlorophyll fluorescence emission from the sample.

– The difference between the

as a screening parameter for stress response.

In the case of light adapted tissue, a proportion of PSII electron acceptors are reduced, closing some PSII reaction centers. Hence the probability that absorbed energy is used for photochemistry is not maximal as competing non-photochemical processes are operating. The measurement of the light adapted ratio of variable to maximal chlorophyll fluorescence ratio permits the estimation of PS II quantum efficiency (

A fully saturating pulse from the chlorophyll fluorimeter is then required to close all of the PSII reaction centers; the temporary inhibition of PSII photochemistry ensures that the maximal fluorescence yield (

) is achieved. If a previous dark adapted measurement of

has been made the extent of photochemical and non-photochemical quenching processes can be determined from the equations of Schreiber et al 19864.

– Adaptation to high irradiance can involve significant changes in the confirmation of the photosynthetic apparatus which result in non-photochemical energy dissipation in the PSII antennae, before energy reaches the reaction centers (Horton et al. 19915, Horton and Ruban 19946). Failure to account for this effect can lead to inaccuracies in calculation of the relative contributions of photochemical and non-photochemical energy dissipation. This problem can be overcome by transiently shading the sample and using a far-red light source to preferentially excite PSI relative to PSII (electrons are drawn through the electron transport chain effectively opening PSII reaction centers and allowing measurement of a light adapted

, usually given the notation

– Takes a reading of the current incident photosynthetically active radiation value in µmol m-2 s-1 from the on-board PAR sensor of the FMS/PTL if connected to the chlorophyll fluorometer. Please note that the FMS/PTL leafclip is supplied as standard with FMS 2 but must be purchased as an option for FMS 1.

– Takes a reading of the current temperature in °C from the on-board thermocouple of the FMS/PTL if connected to the chlorophyll fluorometer. Please note that the FMS/PTL leafclip is supplied as standard with FMS 2 but must be purchased as an option for FMS 1.

– A measure of the photochemical quenching coefficient calculated as:

– A measure of the non-photochemical quenching coefficient calculated as:

– An alternative definition of non-photochemical quenching calculated as:

– A measure of the electron transport rate calculated as:

requires the FMS/PTL leafclip which is supplied as standard with FMS 2+ but must be purchased as an option for FMS 1+.

2 Björkman, O. and B. Demmig (1987).
Photon yield of O2 evolution and chlorophyll fluorescence characteristics at 77K among vascular plants of diverse origins.
Planta, 170, 489-504.

3 Genty, B., Briantais, J-M. and N.R. Baker (1989).
The relationship between the quantum yield of photosynthetic electron transport and quenching of chlorophyll fluorescence.
Biochimica et Biophysica Acta, 990, 87-92.

4 Schreiber, U., Schliwa, W. and U. Bilger (1986).
Continuous recording of photochemical and non-photochemical chlorophyll fluorescence quenching with a new type of modulation fluorimeter.
Photosynthesis Research, 10, 51-62.

FMS 1+ is supplied with the following components:

One of the extensions of the Google search facility is Google Scholar. It allows you to search through vast archives of peer-reviewed published papers and journals that have been posted online.

Use the tool below to enter search terms as required. As an example, hansatech instruments FMS 1+ has already been entered into the search box. Press the "Search" button to view the Google Scholar results for this search string.

Admittedly, some of the results link to journals which require subscription in order to view the publications but even so, we have found this facility to be a valuable tool.

Products related to the FMS 1+

We use cookies to ensure that we give you the best experience on our website. If you continue to use this site we will assume that you are happy with it.OkPrivacy Policy
Go to Top