At physiological temperatures peak fluorescence emission occurs in the red region of the spectrum (685 nm) and extends into the infra-red region to around 800 nm (Krause and Weiss 1984) as shown in the diagram below. 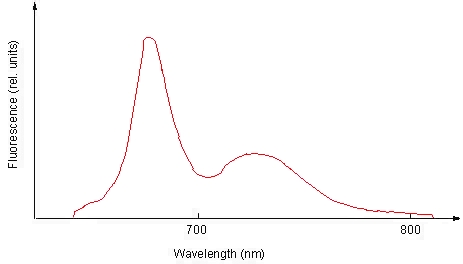 Accurate determination of fluorescence requires a detection system which is sensitive to fluorescence wavelengths yet blind to the actinic (or excitation) light which drives photochemistry. In continuous excitation instruments such as the Handy PEA and Pocket PEA, signal discrimination is achieved using a custom designed 650nm actinic light source to drive photochemistry; optical filtering of the detector prevents detection of non-fluorescence wavelengths of light. Unfortunately such systems must be shielded from ambient light during use, otherwise the red / far-red component of day-light will be super-imposed on the fluorescence signal.

This problem is avoided by a modulated chlorophyll fluorometer as it uses an electronic method, commonly referred to as pulse modulation, to separate actinic light from the fluorescence signal (Ögren and Baker 1985). During measurement the tissue sample is exposed to a pulsed amber (or optional blue) LED light source (the modulating beam) which induces a pulsed fluorescence signal from the sample under conditions where ambient light is excluded. When ambient light is applied, the optical filtering of the system allows three types of light signal to reach the detector: 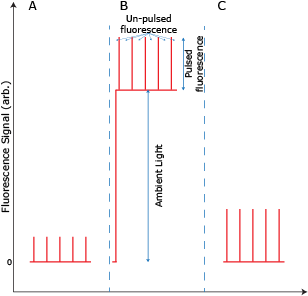 The diagram opposite shows the fluorescence signal detected by the FMS 1 and FMS 2 modulated chlorophyll fluorometers under modulating beam only conditions (A), under actinic light plus modulating beam before (B) and after (C) the rapid pulse peak tracking electronics. The pulsed fluorescence that is induced by the modulation beam is effectively used to probe the efficiency of light-use for photosystem II photochemistry. Clearly it is important that the measuring technique itself does not induce changes in the physiology of the sample under investigation.

Exposure of a sample to a powerful pulsed light source may be expected to introduce a significant artefact into the measurement. However, Hansatech Instruments modulated chlorophyll fluorometers have been specifically designed to avoid such problems by using a modulating beam of very short duration pulses (1.8 µsec) with long off period between pulses. The net result is that the integrated amount of radiation incident upon the sample from the modulating beam is very small (approx. <0.05 µmol m-2 s-1), too small to induce significant physiological change in the sample (Schreiber et al. 1986*), yet powerful enough to provide a reliable signal for fluorescence analysis.

The interpretation of fluorescence signals has developed considerably since the early experiments of Kautsky and Hirsch (1931)** with several techniques employed to determine information about the photosynthetic performance of PSII (Baker 1991***). Hansatech Instruments modulated chlorophyll fluorometers have been designed to incorporate these techniques into simple routines which store appropriate chlorophyll fluorescence measurements and automatically calculate key parameters.

* Schreiber, U., Schliwa, W. and U. Bilger (1986). Continuous recording of photochemical and non-photochemical chlorophyll fluorescence quenching with a new type of modulation fluorimeter. Photosynthesis Research, 10, 51-62. 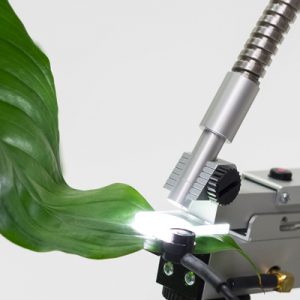