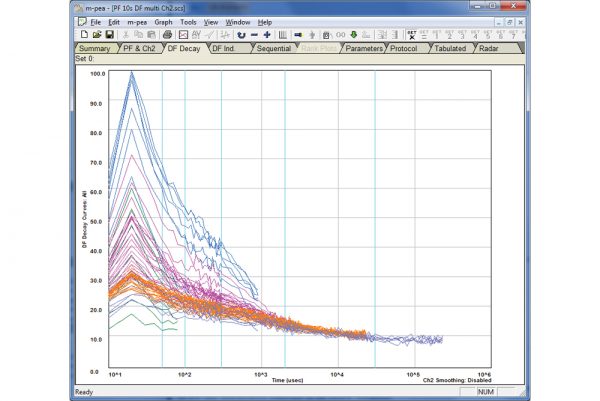 Delayed fluorescence (DF) has much in common with prompt fluorescence (PF) because it originates from the same chlorophyll molecules of the Photosystem II antenna complexes.

Like PF, the properties of the DF emission are highly sensitive to the functional state of Photosystem II and the photosynthetic reaction chain as a whole. Theoretically, DF bears even more information about the photosynthetic processes than PF. Still, a fluorescence measuring instrument can be found in almost every plant science research laboratory, while DF has not gained much popularity as a practical method to study photosynthetic organisms. One reason for such injustice is that DF is harder to register than PF. But the greatest difficulty in using DF is its interpretation, or extracting the valuable information from this extremely complex signal.

Fortunately, in recent years we’ve witnessed major advances both in development of electronic engineering and also in the theory of DF measurements. We are more and more able to utilise DF for practical scientific research. It is the combination of these 2 factors that has lead to the development of M-PEA.

The delayed fluorescence emission, natural to all green plants, has been known to scientists for over fifty years. It was first discovered by Strehler and Arnold (1951) when they were attempting to use firefly luminescence for the measurement of the light-induced accumulation of ATP in the green alga Chlorella. They found that even without the addition of luciferase and luciferin, there was a long-lived glow from algal cells and chloroplasts in darkness following illumination. The observed delayed fluorescence was characteristic of different photosynthesising samples used—leaves (Strehler and Arnold 1951), chloroplasts and photosynthesising bacteria (Arnold and Thompson 1956). Strehler and Arnold postulated that it was in fact chemiluminescence of the chlorophyll, caused by reversal of the photosynthetic reactions. The close relationship between DF and the photosynthetic reactions was confirmed undoubtedly in many studies and sometimes DF was found even more sensitive than the prompt fluorescence (Kramer and Crofts, 1996).