Hansatech Instruments Ltd Oxygen Electrode Measurement Systems are based around the S1 Clark type oxygen electrode disc. The oxygen electrode systems featured on this website are configured to allow studies within a wide range of applications in cellular respiration and photosynthesis research. The systems are divided into 2 categories.

The following text and image are based on the chapter “The Principle of Oxygen Measurement” from the book “The Use of the Oxygen Electrode & Fluorescence Probes in Simple Measurements of Photosynthesis” by Prof. David A. Walker (Oxygraphics Ltd. 1987).

Hansatech Instruments oxygen electrode systems for photosynthesis and respiration measurements take one of 2 forms, liquid or gas-phase. The measurement techniques for each form are quite different, however, the underlying principles of the measurement of oxygen remain the same. Oxygen dissolved in the reaction vessel of liquid-phase systems or that which accumulates in the sample chamber of gas-phase systems is detected polarographically by the S1 Clark-Type electrode (Clark, 1956).

The oxygen electrode disc comprises a relatively large (2mm diameter) platinum cathode and a concentric silver anode immersed in, and linked by, an electrolyte solution. Both electrodes are set in an epoxy resin disc; the cathode at the centre of a dome and the silver anode in a circular groove named the well or electrolyte reservoir, surrounding the dome. The electrodes are protected by a thin PTFE (Teflon) membrane which is permeable to oxygen and the purpose of the dome is to stretch the membrane smoothly over the surface of the platinum cathode and to allow it to be secured in position by an O-ring. The membrane also traps a thin layer of electrolyte (a solution, which usually contains potassium chloride) over the surface of the electrodes. A paper spacer is placed beneath the membrane in order to provide a uniform layer of electrolyte between anode and cathode.

When a small voltage is applied across these electrodes, so that the platinum is made negative with respect to the silver, the current which flows is at first negligible and the platinum becomes polarised (i.e. it adopts the externally applied potential). As this potential is increased to 700 mV, oxygen is reduced at the platinum surface, initially to hydrogen peroxide H2O2 so that the polarity tends to discharge as electrons are donated to oxygen (which acts as an electron acceptor). The current which then flows is stoichiometrically related to the oxygen consumed at the cathode. 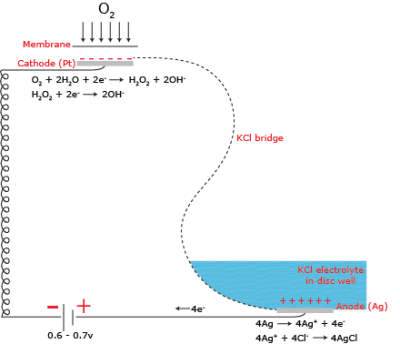 The diagram above represents the oxygen electrode reactions. When a potentiating voltage is applied across the two electrodes, the platinum (Pt) becomes negative (i.e. becomes the cathode), and the silver (Ag) becomes positive (the anode). Oxygen diffuses through the membrane and is reduced at the cathode surface so that a current flows through the circuit (which is completed by a thin layer of KCl solution or other electrolyte). The silver is oxidised and silver chloride deposited on the anode. The current which is generated bears a direct, stoichiometric, relationship to the oxygen reduced and is converted to a digital signal and recorded by an electrode control unit.