Since its original design in the early 1970s by Tom Delieu and David Walker, the S1 Clark-type oxygen electrode disc remains largely unchanged – a true testament to the quality and reliability of the sensor. The S1 consists of a platinum cathode and silver anode set into an epoxy resin disc and is prepared for use by trapping a layer of 50% saturated KCl solution beneath an oxygen-permeable PTFE membrane. A paper spacer placed beneath the membrane acts as a wick to provide a uniform layer of electrolyte between anode and cathode.

When a small voltage is applied across these electrodes (with the platinum negative with respect to the silver), the current which flows is at first negligible and the platinum becomes polarised (i.e. it adopts the externally applied potential). As this potential is increased to 700 mV, oxygen is reduced at the platinum surface, initially to hydrogen peroxide H2O2 so that the polarity tends to discharge as electrons are donated to oxygen (which acts as an electron acceptor). The current which then flows is stoichiometrically related to the oxygen consumed at the cathode. 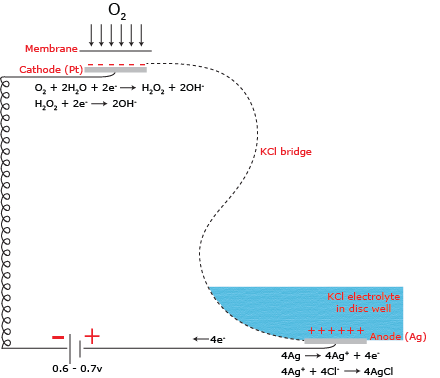 When connected to the electrode control unit, the S1 provides a fast, effective and accurate method of detecting small changes in oxygen concentration.